By now, most people have heard the words climate change or global warming. In simple terms, global warming is the rapid increase in earth’s average temperature over the last 70 years compared to previous thousands of years. This temperature increase and its effects on the climate are together called Climate Change. 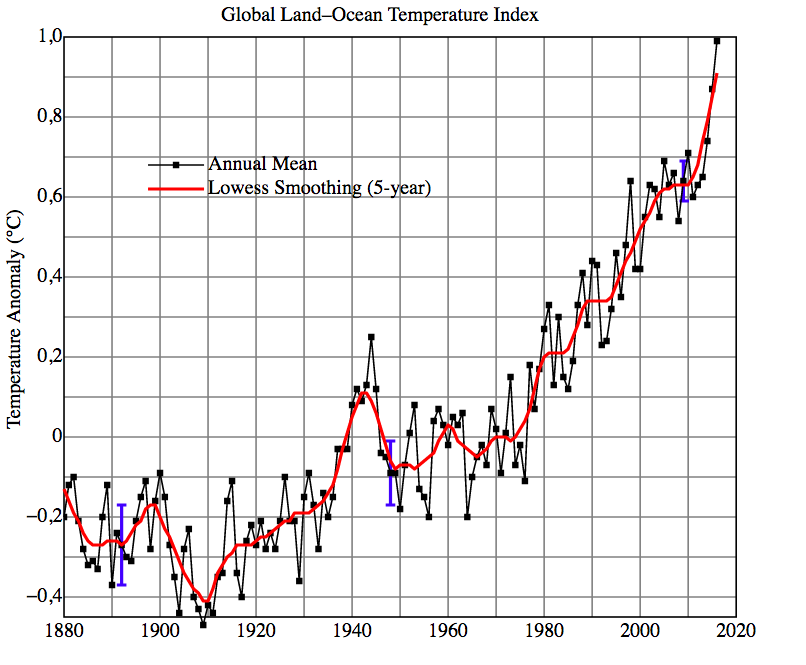 Since 1950s, the global average temperatures have increased rapidly. 1

Why is the temperature rising?

Sunlight that is reflected from the earth’s surface is trapped by the atmosphere. This is a natural process called the greenhouse effect and the gases in the atmosphere that trap this heat are called greenhouse gases. This is the same effect that causes the temperature to drop as we go up a mountain (called ‘hill stations’ in India) – the atmosphere becomes thinner and traps less heat.

One of the main greenhouse gases is carbon-di-oxide (CO2). All animals breathe in oxygen and breathe out CO2. Trees on the other hand, maintain the balance by taking in CO2 and releasing oxygen (and also creating food for us in the process). Burning something also requires oxygen and releases CO2. All of these are natural processes working together to keep the balance in the atmosphere.

However, in the last 70 years, we’ve increased the burning of fossil fuels (last post), increased the population to 7.5 billion and are cutting down trees as fast as possible. The effect of all these is a rapid increase in CO2 in the atmosphere, which as we saw, traps more and more heat causing global warming.

Common sense tells us that increasing CO2 and decreasing oxygen in the atmosphere is a bad idea. Climate scientists all agree that this increase in the temperature is the cause of more severe heat waves, draughts, floods, hurricanes, storms, rising sea levels etc. While all these events are natural, both the severity and frequency of these has been linked to climate change. Just this summer we saw hurricanes Harvey and Irma, floods in Mumbai, Bangladesh, Nigeria and fires in LA, Greenland, Portugal and so on.

In the next post, we’ll address the harmless sounding topic of clean water – how it links to the farmer suicides in poor countries while Wall street investors consider it as the next big investment (as supply decreases, price increases).